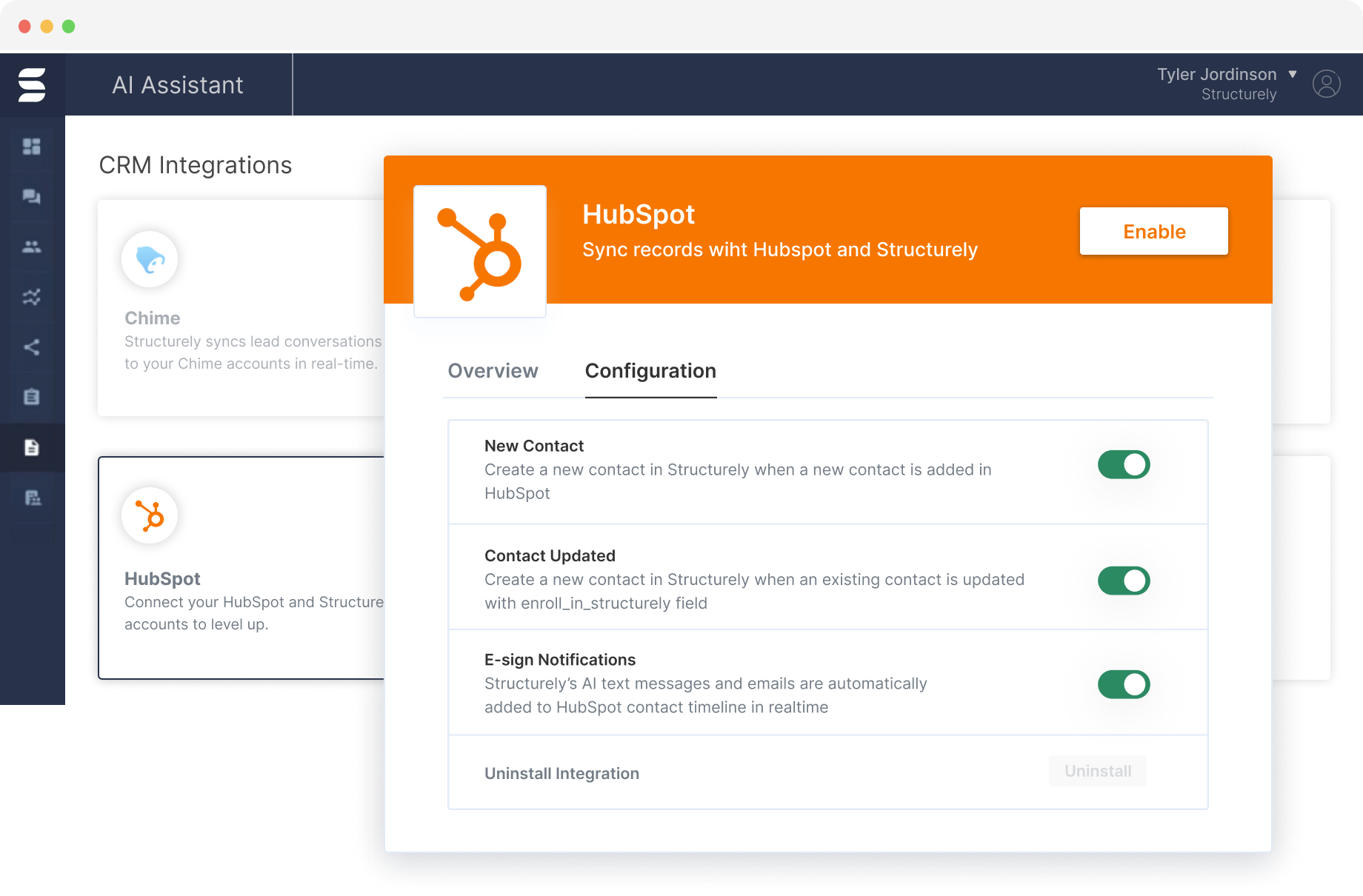 Structurely is a conversational AI platform that streamlines lead qualification for sales and marketing teams, primarily in the real estate and mortgage space. Their product came out of a problem that many companies face today - as lead generation efforts begin to scale, the sales reps who manually qualify leads begin falling behind and their backlog gets exponentially larger. With Structurely, companies can pipe their leads into the platform and have its conversational AI conduct qualifying conversations. As a result of these conversations, the Structurely AI will then send back only the leads that are qualified, so the sales reps can focus their time and efforts on the right prospects.

They are also driving significant growth through their platform as a service offering, by partnering and embedding their AI functionality directly within the CRM platforms.

Today, over 10,000 sales reps rely on Structurely to qualify their leads at scale, and that is just the beginning. As they make their move up market and form additional partnerships through their embedded platform as a service model, this number is anticipated to grow exponentially.

6 months ago, Structurely began shifting their focus from the small to medium sized businesses space towards more enterprise customers and partnerships.

As you can imagine, CRM integrations are a fundamental part of Structurely’s product and roadmap for their SaaS offering to the end-users of their platform. Without the right CRM integrations, customers would not be able to seamlessly pass leads and qualification data between their CRM and Structurely’s AI platform. As a result, having an integration can be the difference between closing a prospect or losing them.

It was during this process of planning their move up-market that they uncovered a key insight - enterprise companies weren’t using the long tail of real-estate specific CRMs that they had traditionally offered. Rather, most of them used more well-known and generalized CRM platforms, particularly Salesforce and HubSpot which was a clear barrier to success in their shift towards targeting enterprise customers.

Trevor, who has led development at Structurely for the past 4 years, manages the end-to-end implementation processes of all of their customer-facing integrations, and has seen the direct impact offering integrations has had on Structurely’s growth.

Despite his expertise with building integrations, they continued to backlog HubSpot and Salesforce integrations as their development team was already stretched. Brian shared that as a product manager, prioritizing the right features/integrations is always a challenge, and this was no different with Structurely.

It wasn’t as simple as just making a prioritization decision however - they knew their existing integration strategy and processes had a slew of challenges and inefficiencies that needed to be addressed, which was why with these 2 major integrations, they wanted to ensure they picked the right deployment method.

Prior to using Paragon, they had been deploying dozens of integrations for their customers through 2 methods:

2. Using Zapier to ship one-off integrations for their customers

For context, Zapier is an integration platform as a service (iPaaS), designed for the end-users of SaaS apps to build and maintain simple integration workflows between their multiple apps on their own.

While Zapier is primarily focused on providing end-users a temporary solution to the silos that exist in every user’s tech stack, companies like Structurely have used the platform as a workaround for their customers to avoid building certain integrations themselves.

‍“We’re one of Zapier’s power users, unfortunately. I’d say our customer success team spends about 10-20 hours a week building or maintaining zaps. We also spend at least 1 sprint per month on some integration issue/build out” - Nate Joens, Co-founder of Structurely

When it came to building server-to-server integrations, they had encountered multiple CRMs that they had difficulties handling authentication for. They wanted a solution that would simplify the entire authentication process, including managing SSO and their customers’ credentials.

Structurely’s customer success team has to help their customers set up workflows on a per use basis, as most customers don’t know how to use Zapier themselves. This also forces Structurely to eat the cost of significant customer success efforts. “If we continue to set Zaps up on our customers’ behalf, it maintains a high level of hand holding from the CS department, and we're just eating costs there.” - said Brian.

Feature Limitations
Given the Structurely team’s focus on product excellence, they also have a universal set of requirements and feature thresholds that needed to be met for any integration they built. Some feature limitations they’ve run into previously include not having the ability for Structurely to receive and push conversation updates, get new leads from the CRMs, and trigger stage changes in their CRM. “We have standards of what we want to accomplish but it was hard to replicate it across every single use case," said Trevor.

As a result of all of these drawbacks and their development team being stretched, the team began their search for other integration platform as a service (iPaaS) solutions in the market. When Nate came across Paragon, he immediately shared it with Trevor in hopes that Paragon would help alleviate some of the resources required for these two major integrations.

“To be completely honest I was very skeptical, but then we started diving into it and playing around, and I was relieved by how much it fit into our workflow.” - Trevor

This skepticism is quite common, as developers are often averse to using low-code tools due to potential feature limitations. However, as they spent more time in the free trial of Paragon, they noticed it checked all the boxes.

The first significant win that they experienced with Paragon was the simplicity of the managed, one-click OAuth 2.0 authentication. This immediately addressed one of the more complex and repetitive challenges that they had previously had to deal with for each new integration.

All they needed to do was input the Client Secret and ID, and the rest of the authentication experience was handled by the Paragon Connect portal (end-user UI).

Paragon helped streamline building out workflows that consisted of the most common and standard actions out of the box. More importantly however, the platform was able to accommodate every single use case they needed.

They were initially concerned that if certain triggers, events or requests wrappers weren't accessible, they would have to build certain workflows from scratch and maintain it separately. Luckily, they were able to build deeper integration features as Paragon still provides easy access to all API endpoints.

“After having done it, we've hit all our integration checkpoints and are ready to add even more features to the integration.” - Trevor

From an operational perspective, Paragon now allows them to manage every deployment of a workflow in a centralized manner, which saves their customer success team multiple hours every week from fixing each customers’ workflow individually.

“Paragon offered the ability to maintain our standards but systemized, and easier to deliver than Zapier, since it was workflow based, vs. per user based.” - Trevor

Additionally, for every additional integration or workflow that they build on Paragon, they will now save exponentially more resources. The unification of business logic on Paragon mitigates the need to deal with the same workflow hurdles and complexities across any integration built on the platform.

On top of all the platform benefits that Paragon offers, the support that Brian and Trevor received from the Paragon team was another big win.

"I've had really good support in our shared Slack channel - the suggestions for features that I have made were well received and promptly responded to." says Trevor.

“The time you've taken to turn those things around to get those features back to us so we can keep working has been impressive. I appreciate that in my role, even though I'm not as engaged in the development cycle.” - Brian

Structurely now has a fully embedded HubSpot integration up and running, that allows their customers to tap into the AI qualification power of their platform without leaving HubSpot’s interface.

When a lead goes into HubSpot, the Structurely AI will automatically email or text the lead to qualify them. If and when a lead is considered to be qualified, the lead’s qualification status will automatically be updated, so that the sales rep can focus solely on the qualified leads. All conversations between the AI and the lead will also be logged right in HubSpot, so the sales reps can easily gain context on the conversations or manually reply to the lead during the qualification process.

Additionally, having built the HubSpot integration and overcoming some of the complexities around the tiered permissions structures for their customers, they are now able to easily build out their Salesforce integration.

“Because we built Salesforce simultaneously, it was just a matter of making the button available on the front end. It's a diminishing costs situation, where each integration we add or workflow we add is going to be way less work for way more gain vs. maintaining it ourselves.” - Trevor

As a result of shipping these 2 major CRM integrations, Structurely is now equipped to target the enterprise customers who would have otherwise not considered using their lead qualification AI.

Looking forward, while Structurely has only shipped CRM integrations to date, Brian has been considering adding a calendar integration to enable their platform to automatically book meetings for the customers’ sales reps when leads are deemed qualified by their AI. Given Paragon’s list of calendar integrations, they expect to prioritize shipping this feature sooner than expected on their roadmap.

Additionally, as they still need to continue shipping the long-tail of niche CRM integrations for new customers, they were thrilled to hear about Paragon’s new custom integration builder, which would allow them to potentially replace Zapier for any new integrations they need to build moving forward.

Ready to get started?